One of the things I find difficult about living overseas is not being able to get enough exercise. I love to swim, so I was delighted when I found several swimming pools in Embu. When I arrived, I asked my Kenyan colleagues about which was the best pool for swimming lengths, but no one knew. I asked a taxi driver, who came up with half a dozen. I made an arrangement with my colleagues, whom I had infected with my enthusiasm, to do a “pool crawl” in the taxi on Sunday. Unfortunately, my colleagues preferred to have a lie-in on Sunday, so I decided to go exploring for pools on foot by myself. The weather was perfect, warm sunshine and cotton-wool clouds in a blue sky. 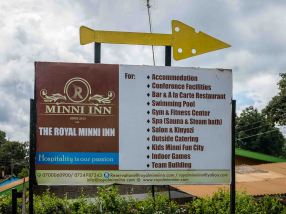 I found the Royal Minni Inn, which had a small pool with a boom across the shallow end to keep non-swimmers boxed in. This left about 15 metres to swim in, which isn’t enough. One kick off from the end wall and I’d be at the boom. It had a gym with some basic equipment and a mirrored room for aerobic dance classes accompanied by thumping drum N bass music. A sign on the wall read, “No Idle Sitting”. It was cheap, but I didn’t stay to loiter.

Some of the pools were in hotels on the outskirts of town. My idea was that I would go to a pool after work at 5pm and get home by 6:30pm, so I’d prefer a central location. The best I found was the Panesic Hotel’s “L-shaped” pool, about 20 metres long with a children’s area off to the side. On the poolside, there were small circular tables with parasols where people were eating.

I thought it was promising, so I telephoned my colleagues who had taken a taxi to the Mountain View Hotel, a couple of kilometres out of town. I decided to join them, but when I arrived it began to rain. I joined them at the poolside. I thought it was rather comical all the people in the pool got out as it rained more heavily. After all, they were already wet. Then there was a peal of thunder and I realised it wouldn’t be safe to be in the water if there was a lightning strike.

The curved, shallow pool was divided in two by a rope, with children on one side and cavorting adolescents on the other side. It wasn’t suitable for swimming lengths, though if I fitted a rudder between my buttocks, I could have swum in circles.

One of my Nordic colleagues had not applied sunscreen and he looked like a boiled lobster. I told him he needed to cover up and stay out of the sun. We ate lunch under a parasol (masala chips, pizza and fish and chips) but the service was slow and the food mediocre.

It took about three weeks for his sunburn to heal. One doctor suggested that he take a cold shower and it would be better in a few days – she had never had to deal with Scandi-skin before. I offered to get him some hydrocortisone cream, but he’s a big lad and there was a lot of sunburn. Searching the internet came up with spraying menthol shaving foam all over his body, but we couldn’t find any in town. And his skin was far too sensitive for it to be shaved.

Eventually, he was able to venture out during the daytime at weekends without being in pain and we walked down to the Panesic Hotel. A large notice outside the changing room said, “Pay here before entering the pool,” but the booth was empty. On the far side of the pool, there were half a dozen young men dressed in black trousers and white shirts, sitting around, chatting. I asked them if I could pay them, but they said that they were waiters. “Shall we wait with you waiters until the manager comes?” I asked. They thought this was very funny. One walked off to the main reception and eventually, someone came to take our money. 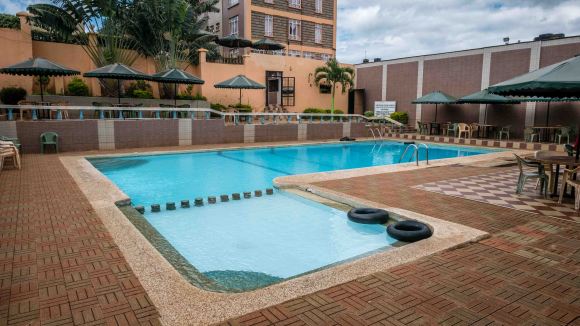 We got changed in a dingy male toilet with a bench and no lockers. There was an audible gasp of astonishment when the Kenyans sitting at their shaded tables had the double shock of seeing a pink man and a white man wearing budgie smugglers walk to the poolside. We commandeered a table and got into the water. It was about 25C, cooler than an indoor pool in the UK, but pleasant in the sunshine.

We had just started to swim lengths when a crowd of young men joined us. Some decided that they wanted to practice diving from the side, others wanted to race. I waited till the activity died down and resumed swimming laps.

The water was slightly cloudy and there were no markings on the bottom of the pool or the wall, so when I was swimming fast, the wall loomed very quickly into view. I had to be on my toes in order to avoid crashing into the wall. At about 5pm, it began to get windy and I could see thunderclouds across the valley. It was time to get out.

I didn’t use the tap in the changing room to shower off the chlorine; I felt safer with the chlorine still on my body. We chatted to the gang of waiters who had not budged since we had arrived. I asked when would they be serving food, and what was it like. One man replied that it was the best in town. “Really?” I asked. “Yes, but I have to say this because my job depends on it,” he replied. Honesty.

Since then, the weather has been too cold to go swimming in an unheated pool. It is winter here in Embu and although today the temperature hit 24C, it rained heavily last night and it was cold this morning. Perhaps by Christmas, it will be perfect for swimming.

Maverick doctor with 40 years experience, I reduced my NHS commitment in 2013. I am now enjoying being free lance, working where I am needed overseas. Now I am working in the UK helping with the current coronavirus pandemic.