Earlier this month, I walked part of the South West Coastal Path in North Devon, from Bucks Mills to Clovelly. The Domesday Book (1086) called Bucks Mills Bochewis. A fast flowing stream rushing through the village of Bucks used to power two waterwheels, hence Bucks Mills. The village is in the parish of Woolfardisworthy (pronounced “Woolsery“).

Number 9 is a thatched cottage with a beautiful “duck-egg blue” front door. The village always seems to be damp, making the stone steps very slippy, hence the handrails.

Emily’s Cottage is also thatched, with a sapphire blue gate. The door and windows are edged in the same colour. The white-washed wall has a built-in postbox, with only one collection per day.

The woods and sea views can be seen in the Instagram photos accompanying this post. Sadly I missed the Clovelly Herring Festival on the 18th of November.

But these photographs were taken in 2013 when I was looking for work as a doctor in Africa. This is the postnatal ward in Brikama Health Centre with doors in the distance. This ward looks really smart following renovation paid for by an overseas donor.

The labour ward doesn’t have doors or internal walls, just curtains. I just popped in for a visit and ended up delivering this beautiful baby. Just helping out. 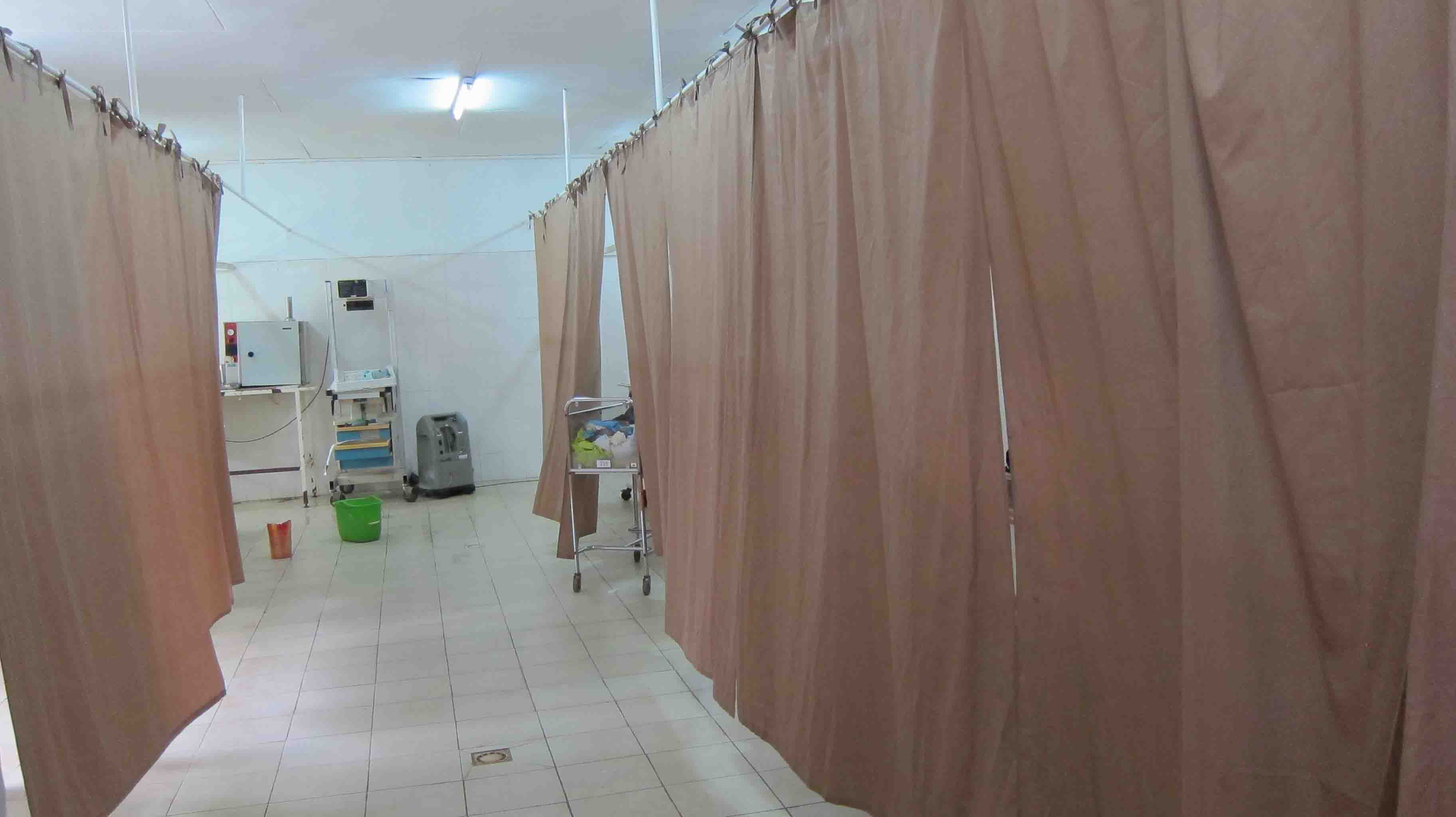 A charity tried to persuade me to work here, but with 6,500 deliveries every year, hardly any drugs, the operating theatre for Caesarian sections was not functioning as it needed “fumigating”, I felt it was too much of a challenge.

I took a decrepit bush taxi from the coast to Bansang, where I used to work. It broke down at Mansa Konko.

I had a soft drink outside the local bar. There is a door in the background.

In Bansang, the old colonial hospital built in 1930, has benefitted from modernisation. Anita Smith was one of the thousands of British tourists who took a holiday in The Gambia but instead of lying on the beach, she decided to raise funds to renovate the hospital. She began in 1992 and has been awarded the MBE (Member of the British Empire) and MRG (Republic of the Gambia). Her work continues, to find out more click here.

These photographs show the operating theatre and recovery room. Very impressive. The Gambia is a centre of excellence for eye surgery, which is done by specialist nurses (the going rate for an ophthalmic surgeon in Africa is one per million population). This is a training hospital for other countries.

I had to visit Binta who was our help 40 years ago. She was very sad when I told her that my wife Sheila had died. She put on her best white outfit and we sat in her courtyard under a tree, drinking tea. Here she is coming out of her front door.

Another post from the past. This time from 2016 in Gondar in the northern highlands of Ethiopia. Some contrasts – ancient Coptic churches and modern nightclubs, abject poverty and shining towers of capitalism.

This is Debre Birhan Selassie Church built in the 17th century by Emperor Eyasu II (“He to whom the light bows”). It is dedicated to the Holy Trinity. Women who are unclean are prohibited from entering the church – any woman who is menstruating or who has had sex recently is deemed unclean. 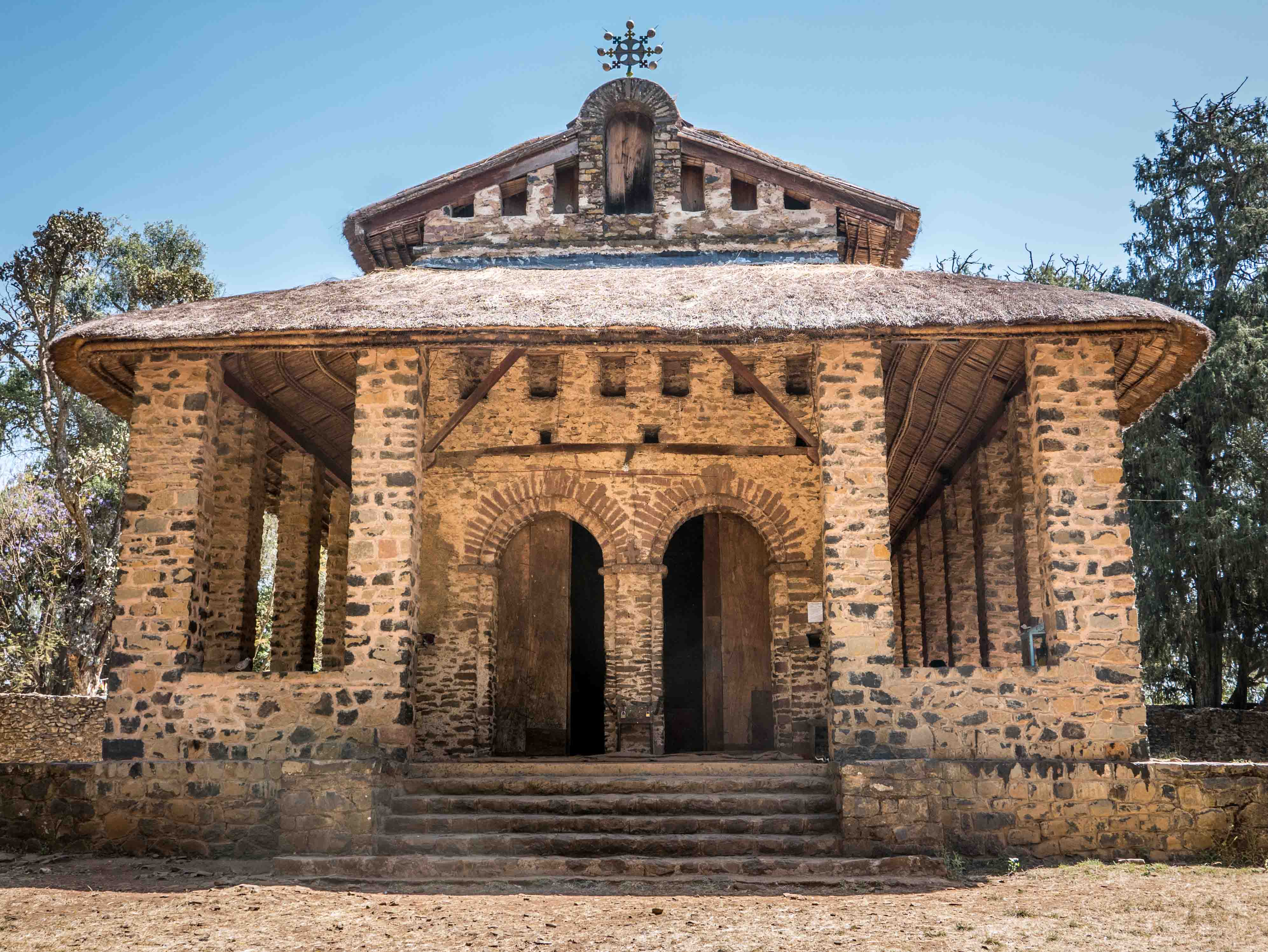 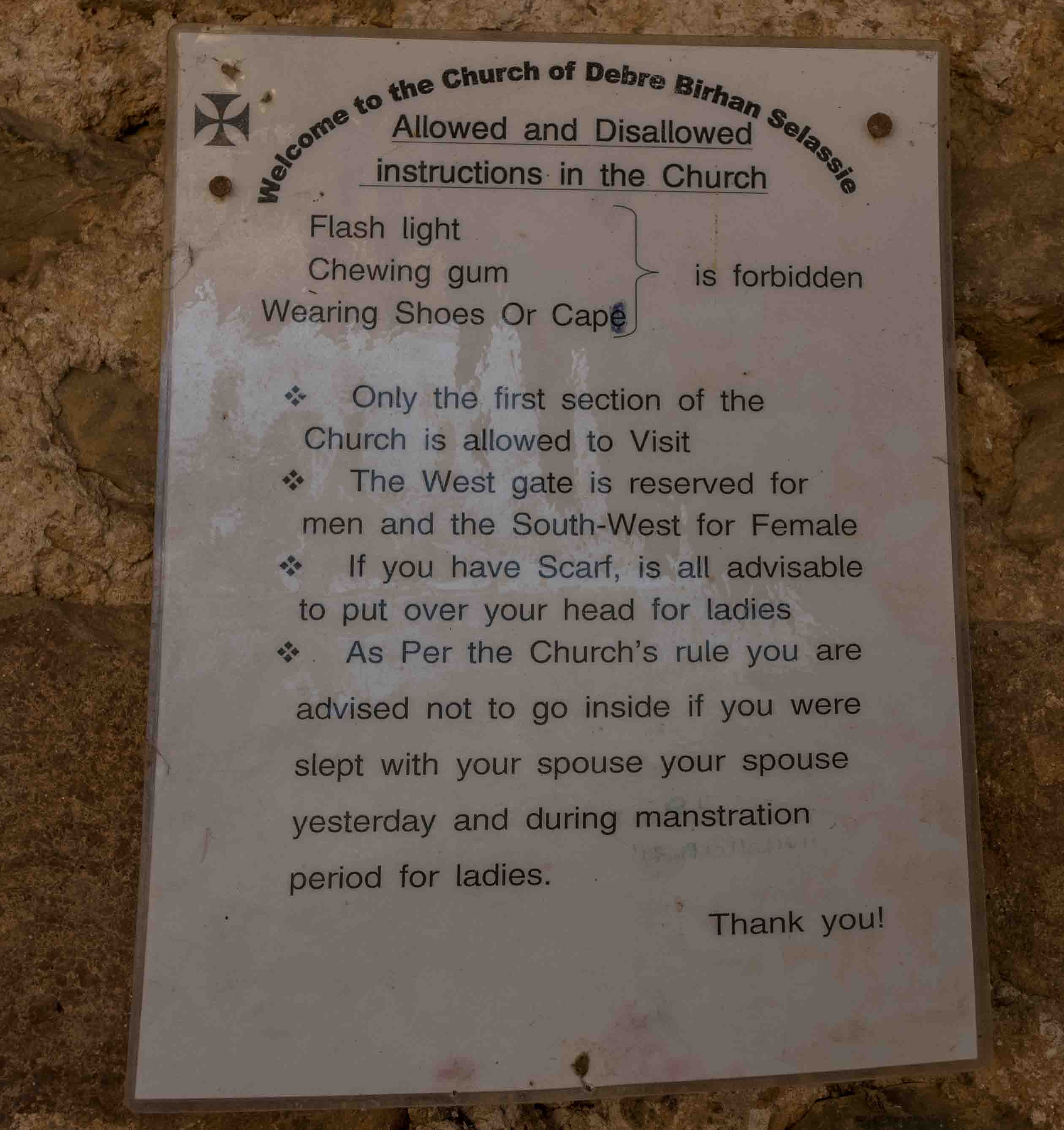 Inside the church, there are some sumptuous paintings. And two doors beneath the mural, qualifying the photo for the blog. The church was almost destroyed by an invading force of dervishes from Sudan in 1888, but a swarm of bees defended the churchyard and the soldiers withdrew. Some say that the bees were backed up by the Archangel Michael standing at the doors with a blazing sword drawn.

Other doors are even more primitive.

But Gondar has an interesting nightlife, with clubs and music venues galore. Here is the “Blues Bar” behind the blue door, next to a night club where you can “bugi” on down. 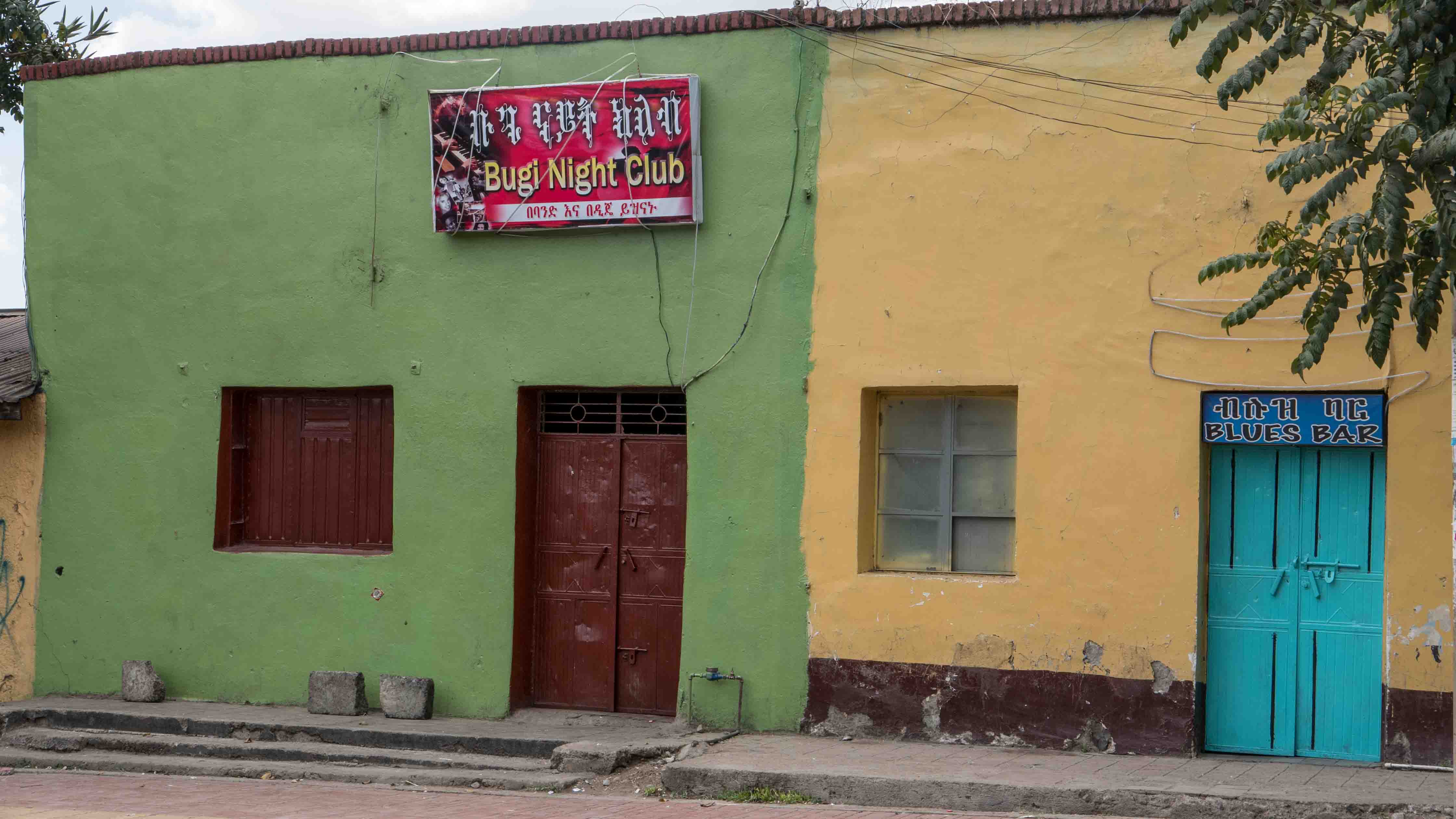 The pink building with a blue door has a sign saying “Geni Bare” illustrated with some dancing ladies. Your guess is as good as mine.

The white building with blue mirror windows is a bank. The grey stone tower on the right side is a nod to the medieval architecture of Gondar’s castles. In the foreground, there are some less salubrious structures – the red stripy awning says it is a business centre. I am not sure what function the tiny shed, made of maize stalks and a blue tarpaulin, serves. A child stands in the doorway, mother bending behind in the rubble.

The modern fashion is to have metal rather than wooden doors. Discerning customers go to Sandak’s despite his dodgy spelling.

Five years ago, I visited Chicago and enjoyed wandering around Rosehill Cemetery where the city’s great and good were interred. Here are some of the doors to the afterlife. I didn’t see any three-headed dogs guarding the entrances. 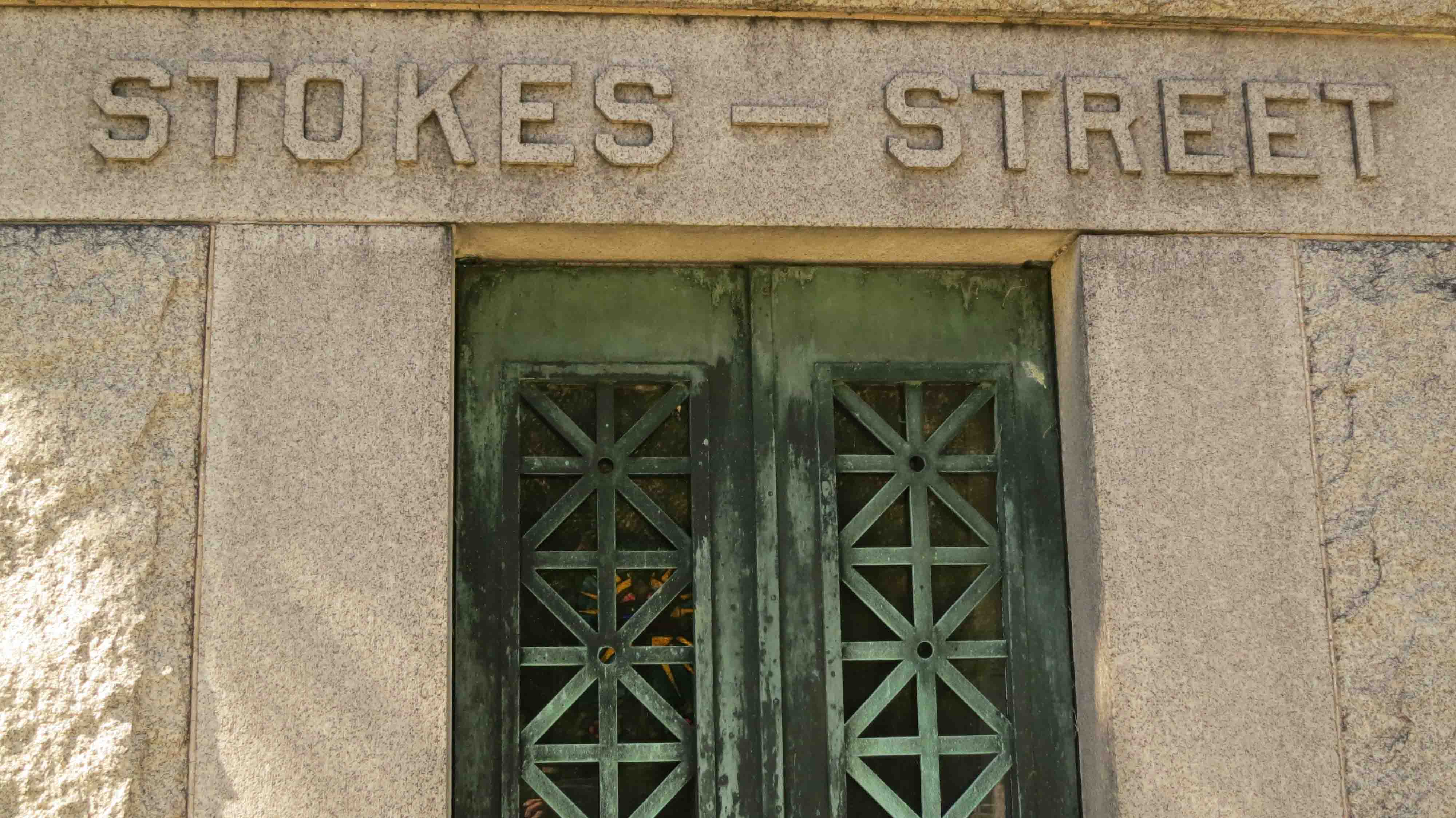 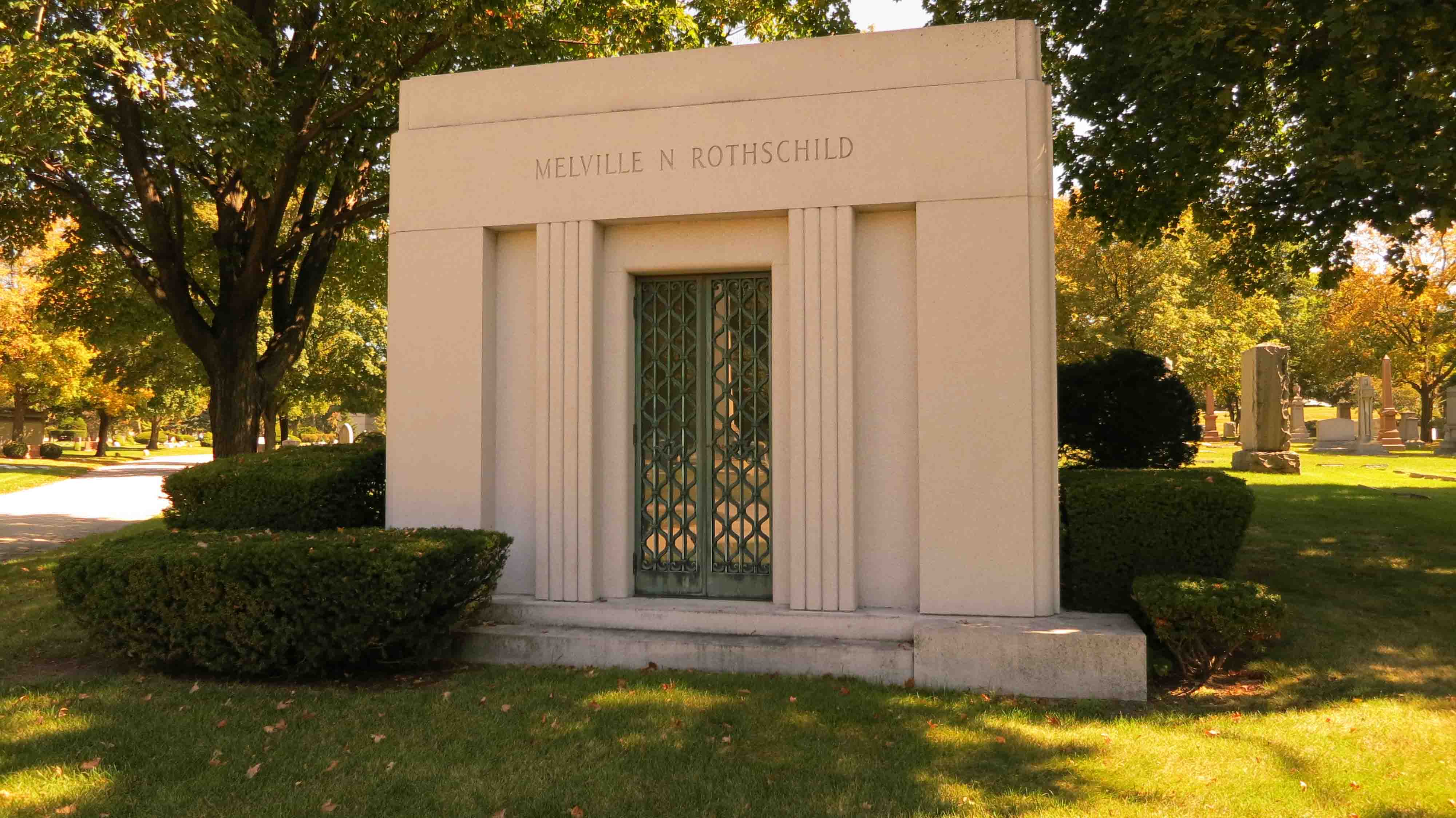 Strangely enough, this Gloucestershire village is not the site of some bloody battle. It doesn’t even have an abattoir. Its name comes from the word “slough”, meaning a muddy bog or water-logged area. As in the “slough of despond” in John Bunyan’s “Pilgrim’s Progress”. Slough became Slaughter.

The picturesque village straddles the River Eye, no doubt the cause of all the flooding. Somehow I have managed to get the correct exposure of the reflection in the stream while overexposing the cottages with their two white doors.

The honey-coloured Cotswold sandstone is beautiful. The door of this house is surrounded by Virginia Creeper.

You can walk across the fields to Upper Slaughter, or follow the River Eye to Bourton-on-the-Water.

According to Wikipedia, Lower Slaughter has been inhabited for over 1,000 years. The Domesday Book entry has the village name as “Sclostre”. It further notes that in 1066 and 1086 that the manor was in the sheriff’s hands. Now the village is in the hands of the local parish council, which refused to permit a tricycle selling ice-cream in the summer as children might climb on it and fall into the stream. You can’t be too careful, can you?