I had to cross eight lanes of traffic to get to the Museum, but it was worth it. I had to sign in at the gatehouse, show my residence permit (I have diplomatic status, but not like Boris) twice and pay the US$6 fee. This got me into the museum and the snake park. Viewing the dinosaur in the gardens was free.

The main galleries are arranged around a central hall. This has an artistic pile of calabashes, a map of Kenya made from butterflies and a remarkable necklace made from feathers. On the ground floor, there is an exceptional collection of East African stuffed birds in glass cases. The note cards giving the name of the bird, its habitat and snippets of information have been typewritten. This makes the presentation look dated, but the exhibits are phenomenal. Look at all these different types of hornbill, for example (and I only photographed half of them). There are almost a thousand specimens on display. 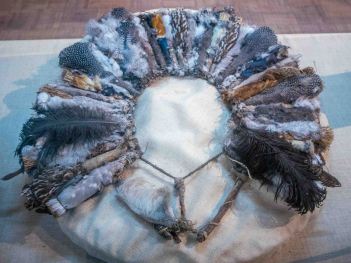 I could have spent an hour scrutinising the birds, but I had to attend a meeting in the afternoon, which was the reason I was in Nairobi. Also on the ground floor, there was a collection of mammals and a fascinating exhibition displaying skulls of hominids found in the Rift Valley. The oldest human remains found at Baringo date from 7 million years. Kenya was the place where apes evolved into humans. I stopped to watch a flickering video loop showing how scientists investigated the surface of teeth of different hominids using a scanning electron microscope to find out what they had been eating.

On the gallery of the first floor was an exhibition of the life and paintings of Joy Adamson (“Born Free” the book describing how she reared Elsa, a lioness). These showed flowers, fish and fierce warriors from different tribes.

I enjoyed reading about how a traditional healer used goat’s horn to store herbal remedies, keeping all his paraphernalia in a satchel rather than a Gladstone bag.

There were glass cases containing children’s toys, masks and skeletons. A large part of the upper floor was occupied by an exhibition of the struggle for Kenyan independence, with photographs of the mau-mau commander, General China. The exhibits were quite outspoken, openly criticising corruption. 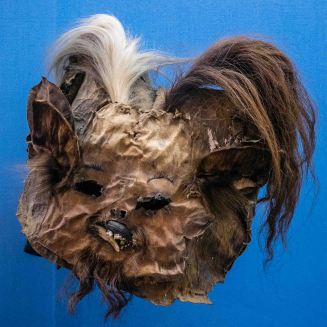 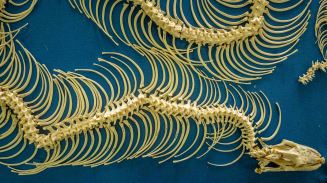 Finally, there were a couple of galleries devoted to modern art – colourful, a bit derivative, pleasant, but nothing I would want to have on my living room wall.

I walked down the hill to the snake park. It was looked a bit drab and needed some renovation, new snakeskin if you like. In glass cases built into the wall were black and green mambas, puff adders, spitting and non-spitting cobras. In the courtyard pit, a boomslang twisted around a sign which read, “Trespassers will be poisoned.” There was a massive African rock python in an open area and another which was housed in a shed. Its keeper brought it out to drape around the shoulders of brave tourists willing to pay a fee. Behind a fence of chicken wire were three Nile crocodiles, looking very bored. 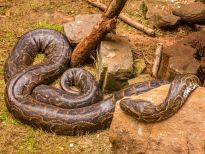 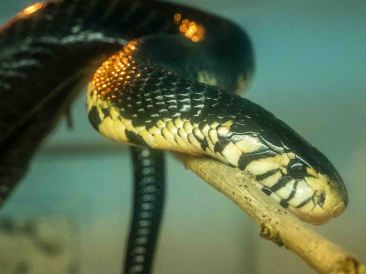 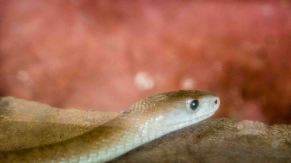 On my way back to the entrance, I strolled through the botanical gardens. A group of workers clad in blue overalls were sprawled on the grass, sleeping in the weak winter sunshine. A park attendant walked past and threw a stick at one of the sleepers. He woke up, rubbed his eyes and went back to sleep.

There was an old, faded red postbox in the garden, overgrown with creepers. It didn’t look as though anyone would be making a collection from it.