Maggie was painting the inscription on the wooden cross which would mark the grave of Francis Thumbi. In the obituary columns of the newspaper, people eschew “Born” and “Died” for the terms “Sunrise” and “Sunset”. She was waiting for the family who had commissioned the casket to confirm the exact dates. “Well, sunset is going to be 2018, isn’t it?” I asked. She laughed and agreed with me. “I think he was born in 1990,” she said. “And do you know how he died?” I asked. “Yes, it was suicide. He killed himself, aged 28. He was not even married.”

I said that in England many years ago, people who committed suicide could not be buried in consecrated ground, in a churchyard. “Why is that?” she asked. “I suppose because it is against God’s law to kill yourself.” “Then you should burn the body,” she said. “Here, he will go into the ground in this casket, under this wooden cross.”

“When I die, I have asked that my body should be used for medical science. They will take it so medical students can cut me up and learn anatomy,” I said. “Waaaah!” said Maggie, “We would not do that here in Embu.”

I turned to scrutinise the coffin. She proudly showed me her handiwork. There was a metallic sign saying “RIP” above a small inspection panel, with a fancy metal knob. I pulled it down and looked inside. The casket was lined with pale blue shiny cloth. There was also what looked like a pair of pants, which Maggie whisked away before I could make a positive identification.

I asked Maggie if she thought that being married might have helped prevent Francis from killing himself. She said it might have, but there were too few women around to marry here in Embu. I begged to differ. “There are many nice Kenyan girls here,” I said. “What about you, Maggie, are you married?”

“Age doesn’t matter. Do you want me?”

“We hardly know each other!”

“Well, take me with you to Japan,” Maggie said.

“But I am from England,” I replied

“No matter, England is better,” she said. “If you won’t marry me, then sponsor me.”

“I can’t do that, Maggie. I am a volunteer working here in Embu.”

“What is your work?”

“Then you have plenty of money to sponsor me!”

I heard gales of laughter coming from the neighbouring corrugated iron shack, a hair salon. Obviously, they were enjoying eavesdropping on our conversation. 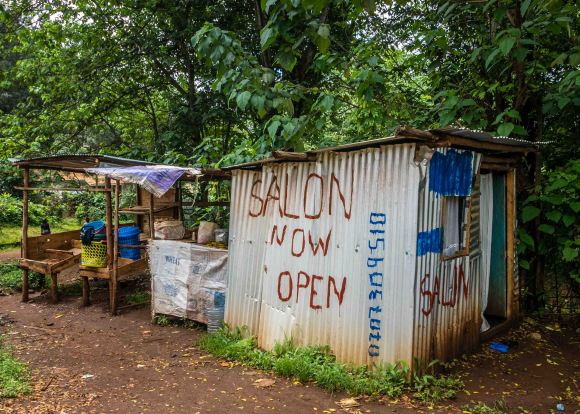 I tried to change the topic of conversation. “Is this funeral shed your business?” I asked, hoping she would say yes.

“No, I just work here. The business is called Leemak,” she replied.

“Lee Mack is a comedian in my country,” I said.

“Never mind”, I said. “Can I take your photograph with the coffin?”

She refused but invited me to take photographs of the coffin. As I did, I noticed some of the white paint used on the cross had dripped onto the metal rail at the side. I tried to rub it off, but Maggie said she would use some spirit to clean it all up.

She went inside the shed and I took my leave, saying, “Faida – goodbye.”

As I walked away, I wondered about poor Francis who had killed himself. In last weekend’s newspaper, there was an article about a schoolboy aged 15 who committed suicide after his family failed to pay his school fees and he was turned away.

Our project here may well expand to cover mental illness. We already have anti-depressants and anti-psychotic drugs on standby in our store. I know that there have been successful primary care psychiatric projects in Uganda and Tanzania, so I am optimistic it could work well here in Kenya. And we might be able to help prevent young men like Francis and the schoolboy from taking their own lives in future.