I must be lucky in love because I have neither skill nor good fortune when it comes to picking winners at the racecourse. The Kenyan St Leger took place on Sunday, June 24th at the Ngong Road Racetrack. We had nothing better to do, so we picked up the ingredients for a picnic at Junction Mall and called a cab.

In 1980 I was evacuated to Nairobi for root canal treatment from Southern Sudan. The local British community rallied round and tucked me under their wing until I could arrange my journey back to Sudan in a Landrover. My dentist drove me around Nairobi Game Park and a medical secretary I had met in Oxford took me to the races.

None of it looked familiar, although the grandstand was probably built before my first visit. There is now a nine-hole golf course inside the track. We paid the 200/- admission fee, bought a programme, bagged a seat on the bleachers with a good view and settled down to study the form. There were seven races, each with between 5-10 runners. Before long, I was completely bamboozled by all the names, jockeys, trainers, handicaps and past performances. The going was good, but I wasn’t.

The programme went into great detail about the different types of bet one could place. I knew about betting to win or for a place, but there were many others. You could place bets for two horses, both coming first or second in a race, intriguingly called a swinger. Plus a trifecta and a quartet, when you had to place all three or four horses past the post in order. Then there were accumulator bets, where the winnings (fat chance) from one race would be staked on the next race, and so on. The example clearly showed how 40/- could win hundreds of thousands of shillings if all the bets came good and you hit the jackpot.

I decided not to bet physically but placed imaginary bets on my chosen horses. Only one of my picks won, at 3 – 1, so I would have been out of pocket if I had staked real money. Selfie came in 4th, forget about Unforgettable which came in 3rd, and tough luck for Tough Cookie, which limped past the post in 4th place. Forewarned was what I should have been, as the Irish horse came in 4th.

My colleague is a more experienced gambler, but even he only bet the minimum amount (40/- which is equivalent to about 30 pence or 40 cents) on a few races.

In front of us, there was a hen party of white women, dressed in hats and finery, sipping something potent from a thermos flask. One lady wore a sash identifying her as a bride to be. To our right, there was a phalanx of teenagers wearing red tracksuits. At first, I thought it was the local Arsenal supporters group, but I think they were students on a school trip. 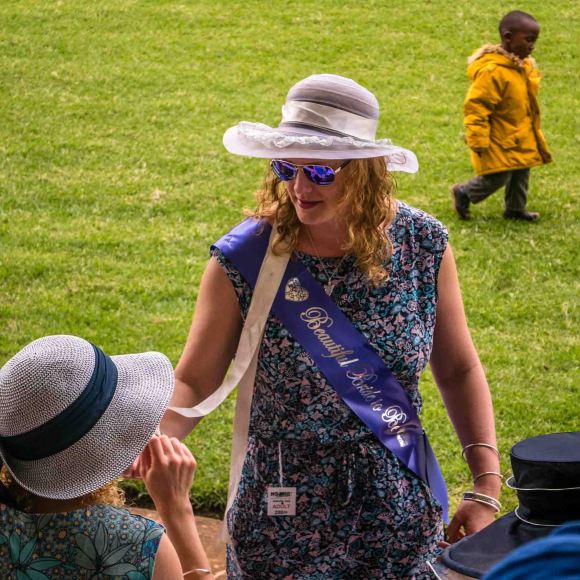 Four Kenyan singers kept us entertained with catchy tunes and slick dance moves, in between races. A disk jockey managed the backing music and sound system. As the alcohol in the thermos flask began to take effect, the bride-to-be joined the singers for some line dancing. Unfortunately, the booze had affected her co-ordination and she couldn’t match the moves of the other four singers. She got a hearty round of applause at the end of the song and tottered unsteadily on high heels back to her hen party. 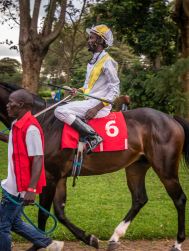 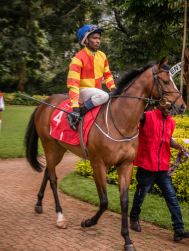 We watched the horses being led around the ring, and how they reacted when the jockeys mounted. The races were all on the flat, varying from 1200m to 2600m. The starting gate was moved around the course. A team of lads helped to get the horses into the gate and after the start, the lads would pile into a van and come back to the grandstand. There must have been about 15 of them in the van, so when the door slid back and they dismounted it reminded my colleague of a clown car, where a never-ending line of passengers would exit. He even downloaded some appropriate circus music to play for their next exodus.

We drank orange juice, scoffed our ham and chicken sandwiches, followed by a slice of gateau. My colleague managed to pick up a signal on his smartphone and kept me updated with the score in the England vs Panama football match. The score sounded like the odds of a poorly fancied horse, 6 to 1. 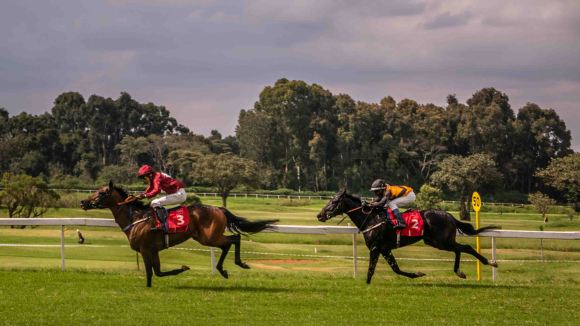 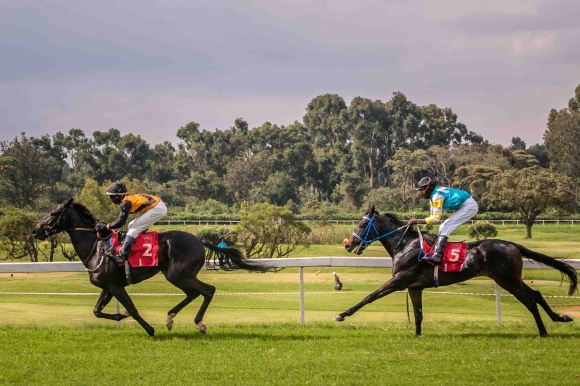 After a few virtual losses, my colleague started to get more confident in his ability to pick a winner. We both chose the same previously unraced horse, Fast Five, for the final event. He backed it to win a place. Unfortunately, another horse withdrew, so his bet was invalid. When the horse won, he waited patiently for his meagre winnings (actually, it was mainly to get his stake back), only to be told his bet was void because there weren’t enough runners to pay out on a place. Storm clouds were gathering to the south, but they didn’t look as angry as my colleague. So 80/- worse off (about 60 pence), we trudged away from the racecourse to our taxi pickup on Ngong Road. 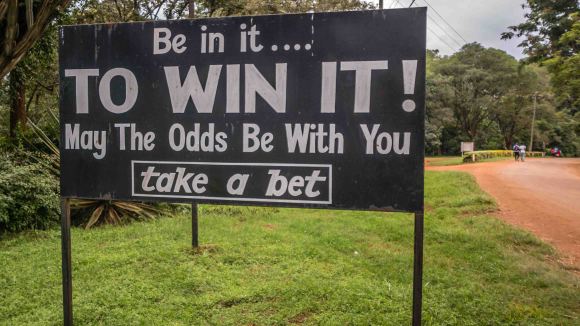 While visiting the Ngong Road Racecourse watching the Kenya St Leger, I messaged my father in England (who has an uncanny knack of picking winners). He replied, warning me of a storm forecast for 5pm. We called a taxi and left the track at 4.30pm. . There is always a traffic jam on Ngong Road. The first juicy raindrops fell just as the taxi arrived at 5.20pm.

On the way home, we passed the birthplace of doors. Still being held up in the jam, I was able to take some photographs from the taxi. 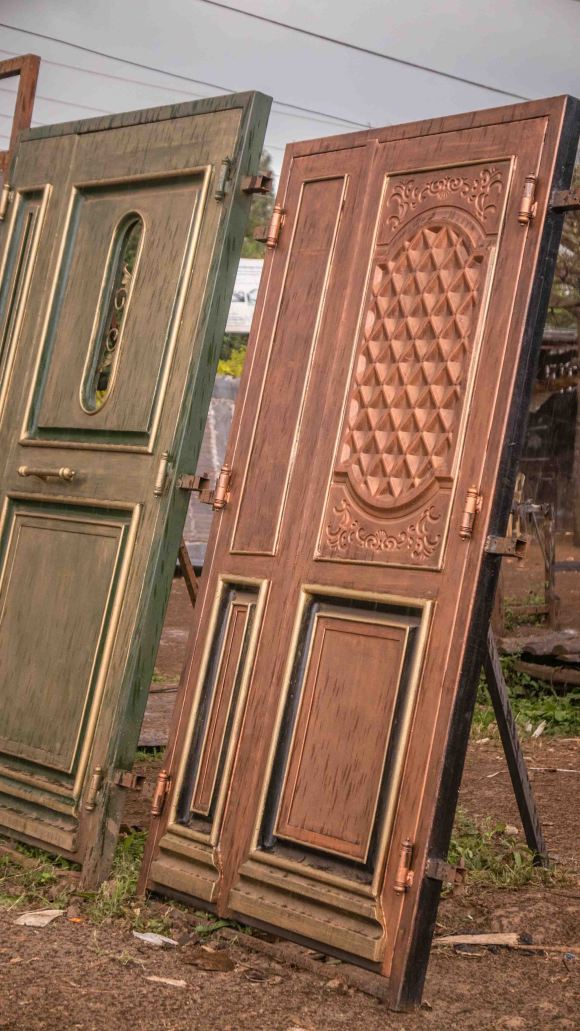 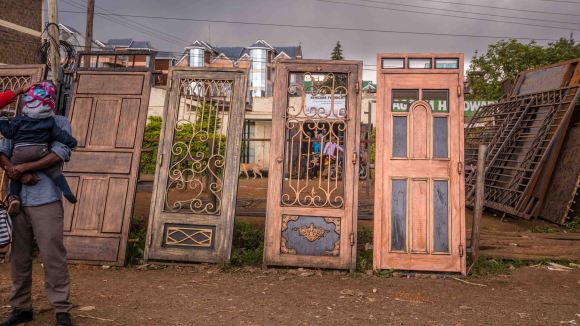 These are for the rich folks. The poor people get by with doors like this. 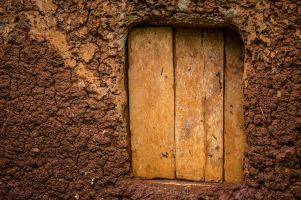