Another post from the past. This time from 2016 in Gondar in the northern highlands of Ethiopia. Some contrasts – ancient Coptic churches and modern nightclubs, abject poverty and shining towers of capitalism.

This is Debre Birhan Selassie Church built in the 17th century by Emperor Eyasu II (“He to whom the light bows”). It is dedicated to the Holy Trinity. Women who are unclean are prohibited from entering the church – any woman who is menstruating or who has had sex recently is deemed unclean.

Inside the church, there are some sumptuous paintings. And two doors beneath the mural, qualifying the photo for the blog. The church was almost destroyed by an invading force of dervishes from Sudan in 1888, but a swarm of bees defended the churchyard and the soldiers withdrew. Some say that the bees were backed up by the Archangel Michael standing at the doors with a blazing sword drawn. 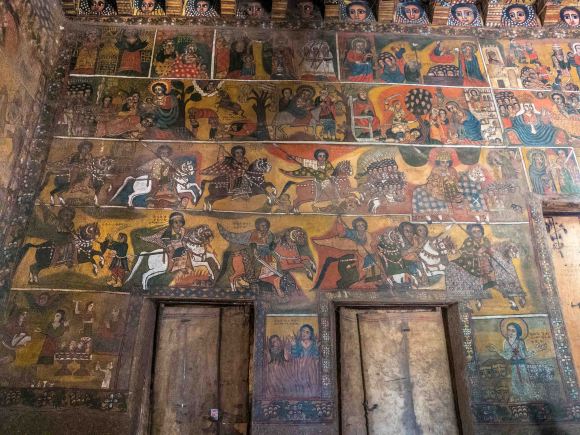 Other doors are even more primitive.

But Gondar has an interesting nightlife, with clubs and music venues galore. Here is the “Blues Bar” behind the blue door, next to a night club where you can “bugi” on down.

The pink building with a blue door has a sign saying “Geni Bare” illustrated with some dancing ladies. Your guess is as good as mine.

The white building with blue mirror windows is a bank. The grey stone tower on the right side is a nod to the medieval architecture of Gondar’s castles. In the foreground, there are some less salubrious structures – the red stripy awning says it is a business centre. I am not sure what function the tiny shed, made of maize stalks and a blue tarpaulin, serves. A child stands in the doorway, mother bending behind in the rubble.

The modern fashion is to have metal rather than wooden doors. Discerning customers go to Sandak’s despite his dodgy spelling.