A dark blue truck recklessly overtook our minivan on the road to the clinic. It was the Dog Support Unit for the Rapid Action Brigade, known as the RAB. I couldn’t stop myself from thinking of another acronym. Rapid Action Brigade Including Dogs or “RABID”.

Along the roadside, I watched a man carrying a bendy bamboo pole with a clutch of empty blue barrels tied to each end. As he walked, the bamboo flexed. The trick was to time one’s steps with the bounce in the pole, so you were lifting off your foot when the pole was rebounding upwards. 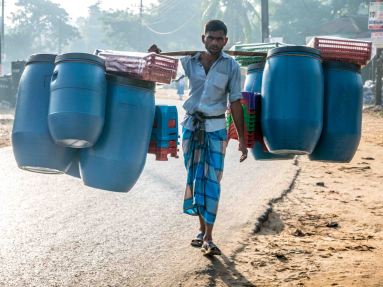 Other men carried earthenware pots in this way. Some cyclists are loaded up with so much plastic stuff that they must need assistance to get back in the saddle once they have stopped. There are some doors in this post, be patient. 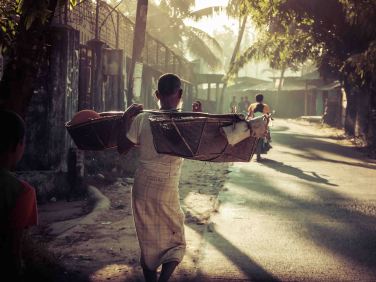 The green paddy fields are turning gold as the rice ripens. Each patch has been planted at a different time, so the harvest is phased. Traditionally, they have two crops a year, but with “Chinese” hybrid rice, they can plant a third crop. The rice is all harvested manually, using small sickles. There is very little mechanisation here. To level the fields after the harvest, farmers use oxen or buffaloes to drag a ladder over the ground. 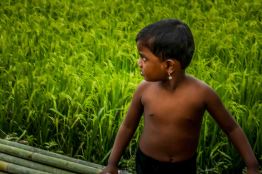 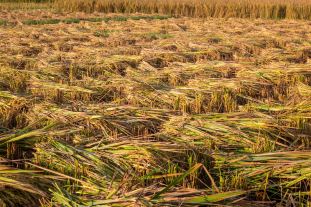 Farmers plant a dead branch in each plot of paddy as a perch for fork-tailed drongos and flycatchers, which keep down the numbers of insect pests. Men take their cows out on a rope so they can graze for their breakfast. Small boys try their luck fishing in the irrigation channels. Two boys sit astride the walls of a bridge, playing ludo or draughts with pebbles.

School uniforms are very smart. Some boys have to wear a military style cap. Girls wear a white headscarf over a primary coloured long shirt dress or kameez. I was amused by a group of boys wearing brightly coloured skullcaps while they played soccer on a dusty field. 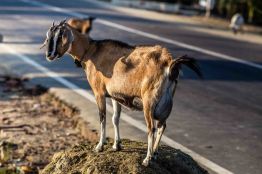 A pregnant goat lies in a bed of ashes, still warm from last night. Men cluster outside a shop selling breakfast food. One of the rundown shacks has been named “Dubai”, probably where the owner earned the cash to build it. 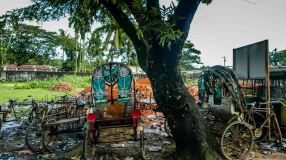 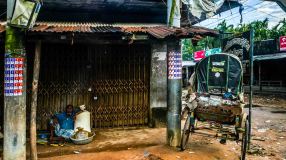 In the small towns we pass through en route for the clinic there are tea shops with strings of gaudy foil packets of snacks, hands of bananas and plastic gee-gaws hanging from the roof. It is usually very quiet when we drive out to the clinic because we leave so early in the morning. 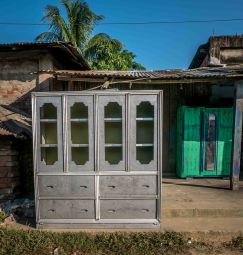 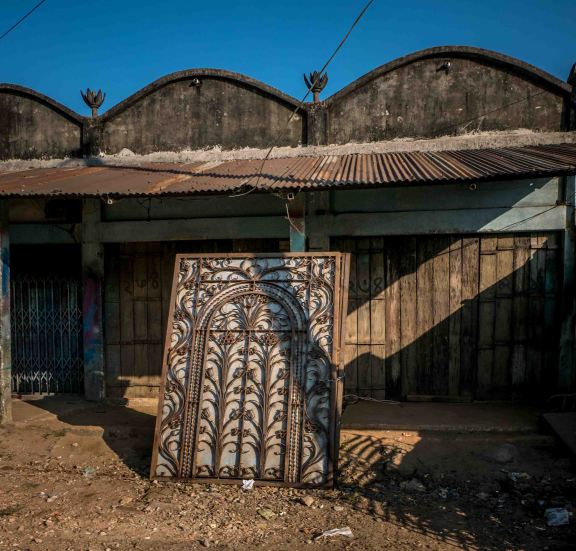 At Court Bazaar, there is more action as the market is in full swing. There are carcasses of beef hanging from hooks. Piles of fruit and vegetables, sacks of different types of rice displayed on stalls. In the mud at the edge of the road, there are cycle rickshaws, e-rickshaws with an electric engine, CNG (powered by natural gas) and TomToms (powered by electricity). Lorries and buses joust for position, horns blaring constantly.

At the roadside, there was an umbrella lashed to a post, providing a patch of shade or shelter from the rain, depending on the weather. 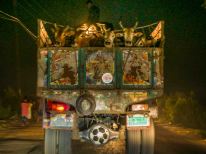 At night when we return after dark, the bazaar is more alive. People throng the narrow streets in droves. They don’t dawdle; they look like they are on a mission to get stuff done. The bright lights of jewellery shops make the necklaces sparkle enticingly. The energy-saving spiral bulbs over the fruit stalls attract moths and flying insects. The pharmacies are also well lit, displaying versions of all the popular drugs. I like the restaurants, with their roadside kitchens shielding the diners from the passing traffic. Pakoras and parathas sizzling in massive cauldrons of boiling oil. Flatbreads being cooked on skillets.

Men packed into a pickup or an e-rickshaw. An empty chicken delivery truck. A group of men working on the roadside, putting down a sidewalk with crumbling bricks arranged in a herring-bone pattern. The toxic soup of fish farms and prawn hatcheries.

The furniture shops make what they sell. No flat packs from IKEA here. They specialise in intricately carved bed heads and doors. The barber shops do deep cleaning facial massages as well as shaves, beard trimming and haircuts.

The ubiquitous piles of fetid rubbish rotting by the roadside add to the scented aroma of biryanis on the evening air. A grocery store has a television blaring out into the street, surrounded by a cluster of small boys sitting cross-legged and goggle-eyed.

What a privilege it has been to live and work here in rural Bangladesh.